Shark and Dyson are somewhere on top of the perching rank of vacuum cleaner brands. So, it only makes sense that we present you with the Shark ION Flex vs Dyson V7 comparison.

Both brands have consistently offered vacuum cleaners that are excellent when it comes to performance. Their popularity among vacuum cleaner users is another proof of this.

From how good these vacuums are, it can quickly become difficult to decide between them. This article exists to help you with that.

Another thing these two have in common is that they are high-end cordless vacuums which mean they can cost a bit. In all honesty, they do.

This is a good reason you want to be extra attention. You don’t want to make a costly mistake, do you?

These two brands have been at loggerheads for a while and it has really made them better for it.

The Shark ION Flex vs Dyson V7 comparison is going to reveal the strengths and weaknesses of both vacuums. This will make it easier to decide which is best for you.

The Shark ION Flex has a unique design with the ‘Flex’ on its wand. It has a double brush roll that makes it work well on both hard floors and carpets. It also has headlights that help you seek out dirt.

The Dyson, on the other hand, has washable HEPA filters that will last a lifetime. That saves you a lot on buying replacements. We all know Dyson vacuums are powerful and this one represents that fully well.

By the end, you will confidently be able to decide which one is best for your needs.

What Situation Is Each Best For? – Shark ION Flex vs Dyson V7

Which Features Do They Have In Common?SharkION Flex vs Dyson V7

The fact that these two belong to the same vacuum cleaner category means there will be some similarities.

Even though they have similar features, they approach some of the execution differently. If that’s the case, we will let you know too. 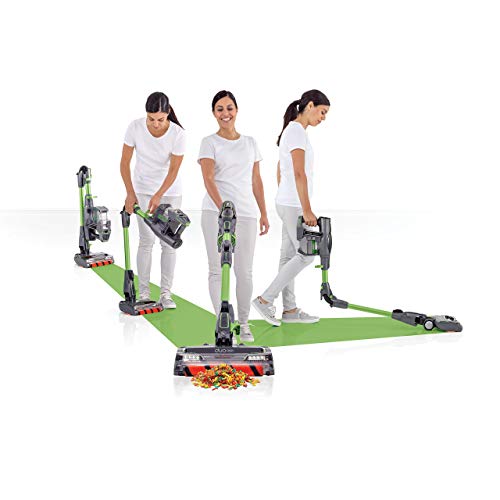 Let us start with how easy it is to use either of these vacuums. You will agree this is important, even though it is not an outright feature.

You definitely don’t want to be spending your hard earned cash on a vacuum you won’t know how to use.

Firstly, we look into the maneuverability. This is something you will enjoy from both vacuums. They are both easy to push on hard floors and carpets and will turn quite easily as well.

Secondly, changing the attachment tools is easy too as it does not require any technicalities. Both vacuums have all the controls you need to use within reach.

Thirdly, let’s talk about the reach. The Dyson V7 has a swivel steering which allows the vacuum to tilt almost parallel to the floor. As you can guess, this makes it easy for you to get underneath furniture.

As for the Shark ION Flex, this is where the ‘Flex’ in its name comes from. There is a mechanism on the wand that lets it bend at 90 degrees.

This will allow you to reach under furniture as well. Only this time, you won’t have to bend as much.

Furthermore, storing both cordless vacuums is easy as well. The V7 comes with a dock that lets you hang it on the wall so it does not take floor space. That’s not all, you can charge it like that too!

The Shark ION Flex, on the other hand, can stand upright if you fold it at the wand all the way down. In this position, it can easily sit covertly in your closet. 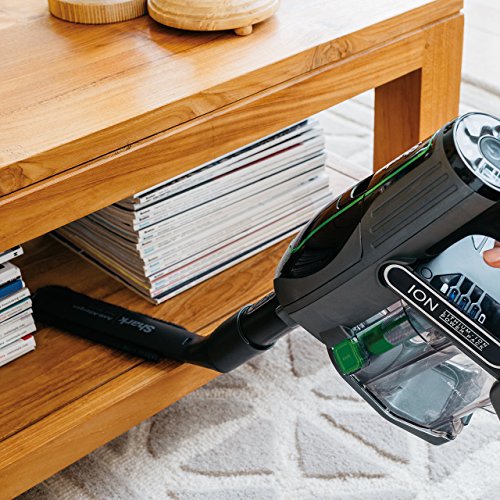 Both the Shark ION Flex and Dyson V7 are capable of transforming into a miniature version of themselves.

This transformation lets you clean up dirt closely and clean in ways you could not in the full mode.

For instance, in the handheld mode, you can dust furniture, vacuum window blinds and drapes, you can also clean upholstery, etc.

That’s not all, since you are not tethered by an electric cord, you are free to roam as far as you need to.

You can go from room to room, up and down the stairs. You can even go as far as your garage if you want to.

One good thing is that how you can use the handheld mode is only limited to your creativity, and of course, the attachment tools available to you.

These two vacuums have powerful motors working them which is responsible for their suction.

Even in normal mode, they will still do a great job of cleaning your floors. However, there are times you need to deeper clean of your carpets, perhaps an area that is heavily trafficked. This is where the Max Mode comes in.

This mode significantly increases the suction power of the vacuum which makes it clean better.

The Max mode on both vacuums can work whether you are using it in the full mode or in the handheld mode.

It is worthy of note that when these cordless vacuums switch to the max mode, there is a significant increase in its suction. This mode is often useful for quick and deep cleaning.

Both vacuums have dust cups that work pretty much the same way. They are also both located on the handle of the vacuum.

The two dust cups open up at the base to allow dirt to fall out. On the Dyson V7, the Radial Cyclone extends into the dust cup which could keep in the dirt even while the cup is open.

To neutralize this, Dyson included a design which involves pulling a lever that lifts up the cyclone. The effect of this is to push out any dirt hanging on.

The Shark ION Flex’s dust cup does not have anything that can keep in the dirt so once you just open the base, down goes all the dirt.

The Shark ION Flex uses a lithium-ion battery just like the Dyson. One good thing about this type of battery is that it provides a continuous flow of power.

However, the battery in the Shark ION Flex is removable. This offers a great advantage, maybe even one that makes this vacuum better when it comes to runtime.

If you are willing to spend a little more to get an extra battery, you can keep one on charge while using the other.

That will give you double the runtime. Another option is to go for the Shark ION Flex 2X model.

The brush head of the Shark ION Flex is obviously bigger than that of the Dyson V7. This is not a quest for dominance, the reason is because the brush head has 2 brush rolls.

One has stiff bristles that comb through the fibers of your carpet to dislodge embedded dirt and pick it up.

The other, microfiber soft brush, will work on your hard floors. This will leave a sort of polished look in its wake.

With this, you can clean on both hard floors and carpets without changing the brush head as you might have to with the V7.

The change you will need to make is within the reach of your finger. You only need to change the vacuum setting to “floor” if you are going on hard floors and “carpet” if you want to vacuum that.

Another awesome thing about this brush head is its ability to handle a pile of debris. The fluffy brush roll in front sort of rolls over the pile making it easy to vacuum.

The direct drive brush head of the Dyson V7 will only push the debris forward. However, if you use its fluffy brush head, you will get a result similar to the Shark Duo Clean’s.

This might sound like a fancy addition just to lengthen the features list. However, if you look closely you will find out that this feature is useful.

The lights are quite bright and provide good illumination. This comes in handy when you are vacuuming in a poorly lit room or dark corners.

Click here to get the Shark ION Flex now!

This is one aspect the Dyson V7 is superior to the Shark ION Flex. If you are an asthmatic or an allergic user, you will agree that this is a lot of value.

It is no news anymore that a HEPA filter is the highest standard of filter you can find in a vacuum cleaner.

A HEPA filter by standard has the efficiency of trapping 99.97% of the content of the air that passes through it down to 0.3 microns.

These are particles way smaller than the diameter of a typical human hair. Now you can rest assured the air that flows out of your V7 is safe enough to breathe.

There’s more! The HEPA filter has lifetime longevity and is washable. This means that you will not be buying replacement filters throughout the lifetime of the vacuum. Just rinse and reuse! Just makes sure it gets dry first.

This is a specialized brush head exclusive to Dyson. It has a mechanism that drives the brush roll.

This is unlike some other vacuums that use the force of the suction to drive the brush roll. This is one way Dyson shows off its engineering prowess.

This, apart from the powerful digital V7 motor, is what gives the brush head a good amount of agitation than its predecessors.

Dyson rates the power of its V7 as 75% more than its V6. This is a lot of suction power considering that the V6 has decent suction.

If you have been wondering how the V7 works so well on both carpets and hard floors with all sorts of debris, now you have it. i. The control buttons are within your thumb’s reach.

ii. It can stand upright which makes for easy storage.

iii. The brush head has LED lights for a better vision.

iv. It has dual brush roll in its cleaner head.

v. It has a mechanism that lets the wand fold in the middle.

i. Some models have a HEPA filter.

ii. The filters are washable and long-lasting.

iii. It has a larger dust cup, albeit slightly.

iv. The brush head has a mechanism that drives the brush roll.

ii. It does not have a HEPA filter. However, its foam filter is washable.

iii. The Shark Ion Flex costs more than the V7

i. You will need to change the brush head to deal with larger debris on hard floors.

We have affiliate relationships with the providers of the products, goods and services that are linked to on this page and may be compensated when you buy. But do note that it doesn’t increase the cost of the products to you in any way or determine our verdict on a product/service.​​​​​​​